All packed and no where to go 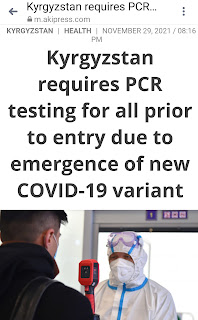 Once again Corona has thrown us a curve ball .  March 10 2020 we were all packed and ready to go in three days then the world shut down .  Finally things were opened up so we could return to Kyrgyzstan for Christmas on the farm .  and wouldn't you know it "Gormogon " as  we non affectionately call the omicron variant ( Gormigon was the evil villain for a couple seasons on the TV series Bones )  has shaken the world.

With the emergence of the variant , Kyrgyzstan announced that they would require testing before arrival .. We were ok with this .. a little tricky since we do not live close to a test centre and the length of time we would be traveling , but we figured out how to make it work.  We even brought my mom up to my brothers Friday to stay  until we return. ..   Then they announced that they were going to block entry to anyone who is from a country were the variant is confirmed .   This has yet to be enforced , but  they have not retracted that statement and say that stricter measures will come into force after  Dec 8 .. we were to land at 3:15 am Dec 9th .

The other difficulty is that Canada requires that we pre register to come back, with a covid test .. If we are turned around in Bishkek, our tests would be expired before we could get back so we would have to stop in Turkey and get re tested and fill out our Arrive Canada app.  and now Turkey has just announced the same restrictions.
So all that to say that we are once again packed have no where to go.  We have successfully canceled and rebooked for return in March .  It is going to take as a day or two to reorganize our thoughts and plans then we will get busy preparing for Christmas.  for another Remote Christmas.
Tomorrow we will begin preparations to fulfil some of the wishes already sponsored  from the Christmas Wish Book  as well I have a couple more requests for help that have come in so stay tuned for more ways to be a blessing .
Posted by Julie and John Wright at 1:34 pm