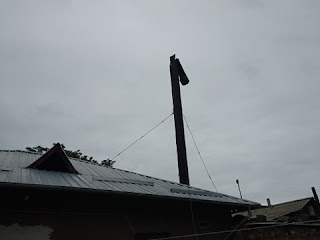 Things were not as good at Ivonofka children's home .   There never is a good time to have serious problems with your boiler system but now is not the best.  At least it was not the middle of the winter.   There are still cold nights, as well the boiler system heats the bath and shower water .  The other problem is that this is in the middle of a pandemic when there is not any extra funds around and not many private citizens are in a position to help.

The Chimney has started to crumble and collapse, and what is still there is pitted with holes.   The boiler system is a large soviet system that requires about twice as much coal as a new efficient one, and the chimney is huge and will cost more to replace then the cost of a whole new boiler with a standard chimney.

We have hired someone to take down what is there .. even that will require a crane and a bucket truck it is just to dangerous to leave it as it is.    The cost of replacing the system is going to be about $2000.  The orphanage director is doing everything she can to find a sponsor in Kyrgyzstan, but we are pretty sure it is going to take more then what she can raise .

Tomorrow we will be delivering food hampers to families in need , stay tuned for tomorrows update.
Posted by Julie and John Wright at 11:25 am