A few weeks ago, Bekah and Azamat got married in Kyrgyzstan.  It all happened in a bit of a whirlwind. So the general response has been "What Bekah is Married ?"   So here is the story.  Bekah and Azamat had been planing to come to Canada for over a year to take some continuing education, and where planing to get married while they were here.  Unfortunately they had visa difficulties so that did not work out.  They still had future plans to make it to Canada for a wedding.  Bekah really wanted her brother Ben to marry them.  Then fast forward to this spring, Benjamin and his family were coming to Kyrgyzstan for a visit, and a couple weeks before they got there, Bekah and Azamat got the idea that this might be a good time to get married .

The wedding itself was up in the mountains and the reception was in at a very cool restaurant made up of beautiful yurts almost like a pioneer village , but very fancy.   So as we were all driving up into the mountain for the wedding, the sky started to darken and rain was threatening.  No problem, we just turned of on the next mountain trail and got out and had the service right there .. 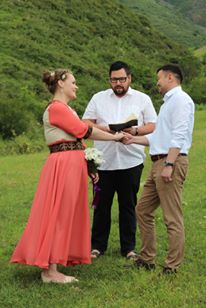 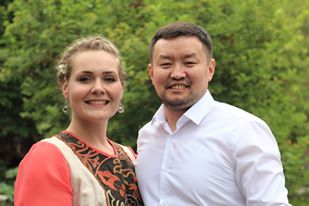 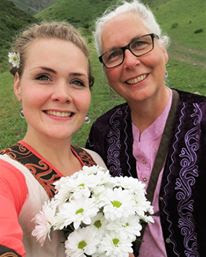 It was absolutely beautiful.  No one can decorate for a wedding like God. The mountains behind them and the valley before them made for the most perfect setting for the wedding.  We had a small group, about 20 of us gathered, and a bag of umbrella's on the ready, fortunately the rains held off and they were not needed.  After the service we drove back down to the base of the mountain for the reception. 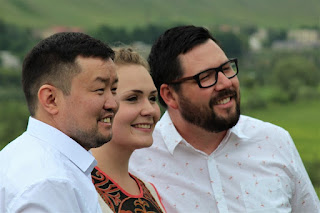 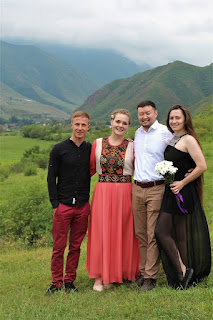 Once we got to the yurts, other family and friends joined us for the celebration.  What a wonderful location to spend time together. 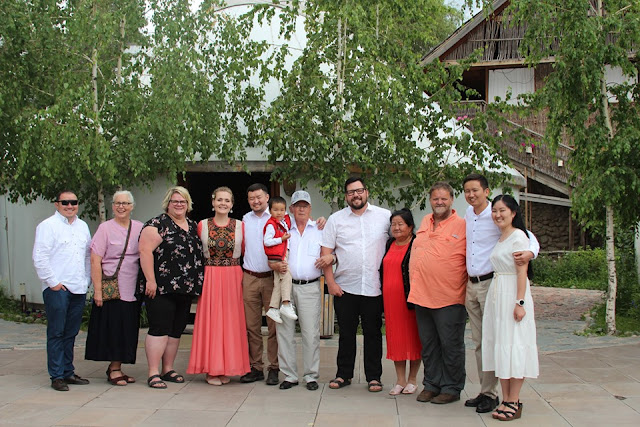 Unfortunately ,  Granddad Bruce had passed away just a couple days before and we had to pack and go to get back in time for the funeral, so we did not get to spend as much time celebrating as would have been nice, and I was not able to get to much posting for those family, friends and supporters that have known Bekah for so long.

Since that time I have had people contacting us asking how they could get greetings and a gift to them for this special occasion, and in particular what they might need .  I talked to Bekah about this, and they are all set in their new apartment, But  they are heading on their Honeymoon in another week.  It all happened so fast that they could not book off work right away and get that part of things organized.  She said that the last gift I sent will go towards that, and any others would be great to use on the honeymoon as well.  There was a bit of apprehension for her because she felt a bit funny feeling like she was asking for wedding gifts.  But thats what you do before a wedding .. let people know what you would like.  So it was decided that she would  have a couple options.   If some one wanted to send a small gift but would rather other then their honeymoon, 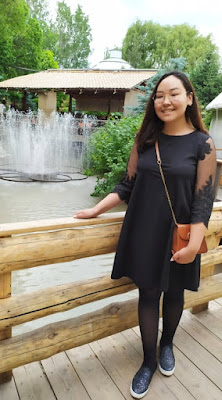 There is someone that is Very dear to her.  Melody has been a good friend and like a little sister to Bekah for about 10 years now, and in fact they have had supper together once a week for the last couple years .  Melody has been excepted to a fantastic private school in Cincinnati Ohio.  This is such a blessing as she has so smart and a great student but has faced terrible bullying buy her teachers in the past because of her beliefs.   So as a second option she would be happy with donations to the scholarship fund, starting with the rest of Melody's expenses .. If you would like to send a little something you can donate at this link as well you will be given an opportunity  to "add a note" where you can send them personalized greetings.  and they will be sure to get them.

Posted by Julie and John Wright at 1:44 pm