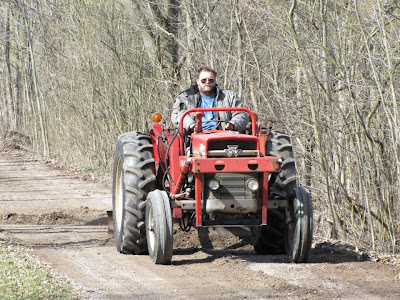 Lots to do.   getting things in order here before we leave in a couple days.    If I am not careful, the home front can start looking worse then some of the projects in Kyrgyzstan.  Fix the front steps, paint the back porch, fill in the massive pot holes and grade the driveway.  change the water filters, and the list goes on.   Then there  is all the packing , we will be bringing 5 hockey bags of vitamins with us this trip along woth another bag of medical supplies, and still we have more that need to go.

Emma and Bekah took lots of vitamins with them when they went last week as well.  Here is Bekah bringing them to one of the orphanages in Bishkek . 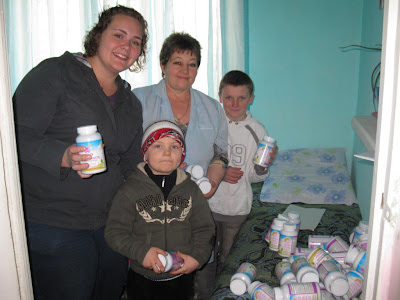 As they have been staying in Bishkek in bishkek until we get there, they have had the opertunity to see some pretty funny things.  It is not every day you see a man and his camel having a rest on an old abandoned lounge chair along the side of the road. 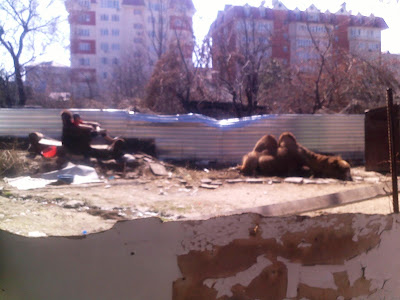 It has not been all fun for the girls.  They have been doing a lot of running around for us this last week.  There are lots of little things that could not wait for us to get there, like Maksat and Ibek.  They were out of food and needed some extra help on the home front.  It was perfect timing .. At the same time as they were coming to the end of what they could cope with, we had a sponsor step forward to sponsor them both .  This gave Emma the funds needed right away to take them shopping and get them what they needed for home and school . She was also able to assure them that we would be there in a week and be able to help them sort through there options .  Below is a picture of them taken in January when we brought them skating with a bunch of other boys that  are in the same position as them... learning about life outside the orphanage. It is such a difficult thing for them, and hard for us to watch.. we NEED a better system to help these poor kids ... 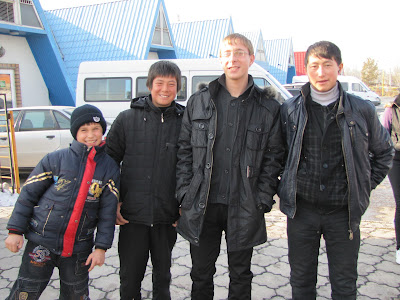 Speaking of a better system,   I just received an update about the homeless that we have been helping .
We had sponsored a bunch of the older homeless to go out and live at the seniors home .  We had enough money to cover them until April when we knew that we would be returning, and winter would be over, not that spring makes life on the streets much better.

It was such a blessing to us to be able to see them in a home , cared for and looked after.  I have seen many of them around the town over the past few years .  One man in  particular hung out around the dumpsters near Acels old apartment.  The kids there had tried to help him.  He has about size 15 shoes, and you simply can't get shoes like that in KG.  They would try to give him food or socks, but her would growl and lung at them to scare them off... he had a big beard and really looked the homeless part.. They would refer to him as BIG FOOT.    This winter as part of the work of our friend , they got to know and build the trust of BIG FOOT, who later became Uncle Sasha... 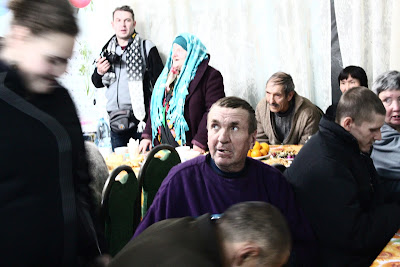 When we met Uncle Sasha, at the seniors home, it was so hard to believe that this was the same man.. I had to look at his feet to be sure .  As Love was poured into Sasha's life, the hurt and anger was striped away, and  a kind gentle man was reveled.

Well the first of April is tomorrow.  |The winter feeding program is over and the sponsorship money has been used up.  They spoke to the 6 seniors that we had living at the seniors home.  Not certain yet where the money would come from, they asked if they would like to stay on at the seniors home .. 4 readily agreed , but two of the men .. including Uncle Sasha have decided that they should return to the streets.  I am not sure why.. They were very happy at the seniors home, but I have my suspensions...    Many people who have never experienced love before, have a hard time receiving it.   With the uncertainty of where the money would come from to look after them, it is my guess that they do not want to be a burden to the seniors home.

One of our  first stops will be to go with our friends to find Uncle Sasha, and let him know that he like his other friends at the home , is loved, and Love is never a burden... Love is freely given and freely received.

LOVE.. Freely given and freely received.. that is a message that we seem to carry with us every time we go.. but it sure is a conundrum... How is it that our hearts can experience such pain as a result of LOVE.. how is it that if LOVE is free, yet we must sacrifice so much and put everything on the line sometimes , just to show our LOVE...
I was always taught  ......


"If I can fathom all mysteries and all knowledge, and if I have a faith that can move mountains, but have not love, I am nothing. .  If I give all I possess to the poor and surrender my body to the flames, but have not love, I gain nothing.
Love is patient, love is kind. It does not envy, it does not boast, it is not proud.  It is not rude, it is not self-seeking, it is not easily angered, it keeps no record of wrongs.  Love does not delight in evil but rejoices with the truth.  It always protects, always trusts, always hopes, always perseveres.
Love never fails."
Once when we first got to Kyrgyzstan ,  we asked one of our workers / friends,  How can we best  help the Kyrgyz people .. her responce was profound ... Just love us !
In two days we will be returning to Kyrgyzstan,   At this point, we don't have a lot of finances to do grand projects, other then the new  hospital beds for the maternity hospital, but we can fulfill the mandate our friend gave us . Just love them!

Posted by Julie and John Wright at 5:32 pm